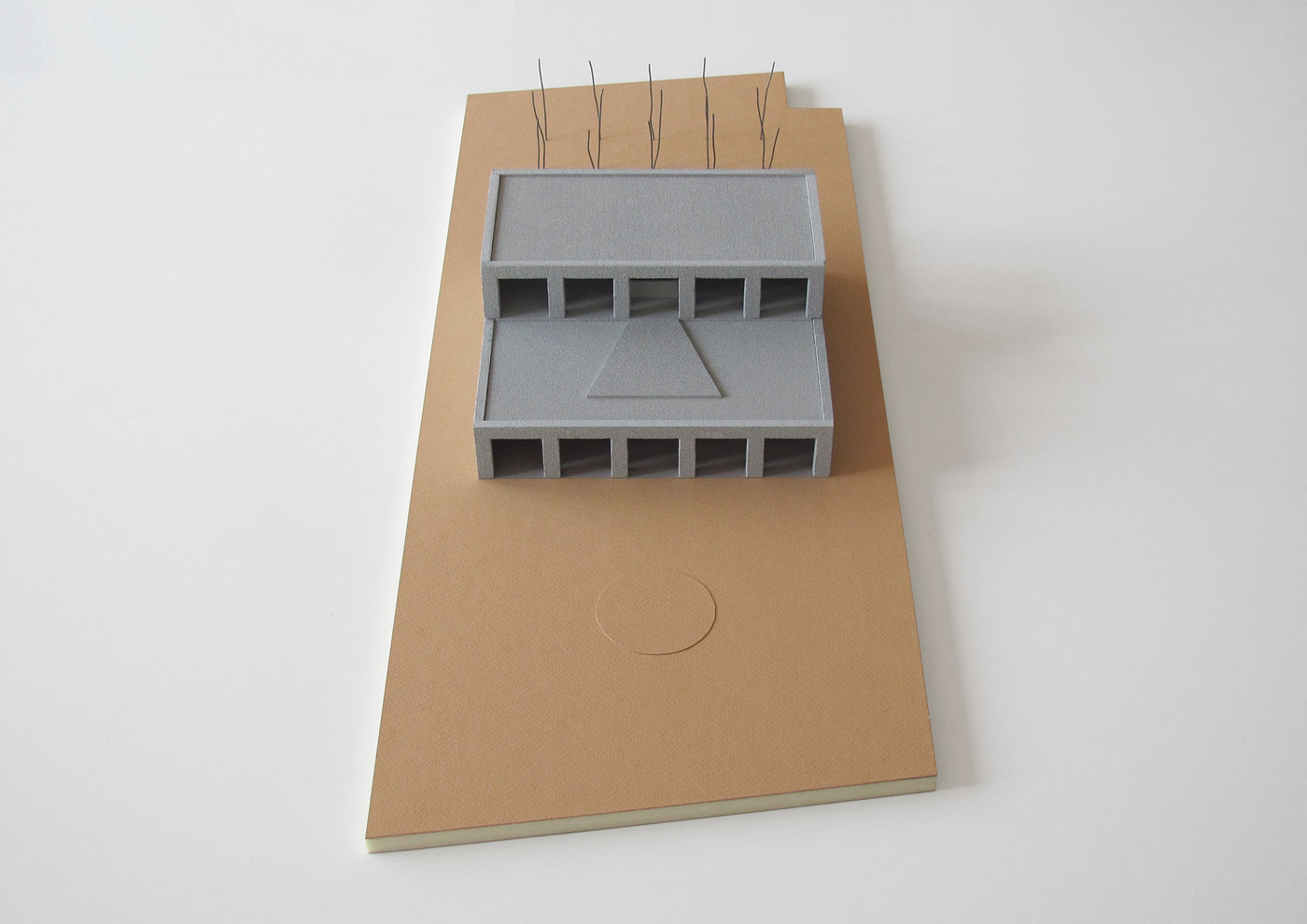 The house under design is to be built in a small town in Opole Silesia. The plot of land is located peripherally in a quiet, gradually developing district. The terrain is flat. Undoubtedly, the southern view of the forest constitutes the most attractive feature of the surrounding landscape. Although the plots adjacent on the south are to be built up in the future, the planning considerations ensure that the ‘green horizon’ will remain clearly visible and valuable part of the scenery. From the north, the plot is in direct contact with the existing urban tissue. Both the existing and the newly emerging developments are characterized by a particular spatial order – the buildings retain the continuity of regulation line. The contrast, however, is visible in the architectural layer, marked by stylistic chaos – the diversity is noticeable on every level, from scale and geometry to the material, color, and texture.

The design assumptions for the building have been based on the investor’s requirements and the guidelines of the Local Spatial Development Plan. The most important among them are as follows: the functional program for the house (designed ultimately for a 4-person family); the owners’ collector’s passion for old cars (which necessitates an increased number of parking spaces); the required alignment of buildings; and the access road to the plot, located in the south-east corner (the drive occupies the most sunlit, southern part of the plot).

An analysis of the context and design assumptions has demanded that advantages of the development should be searched for in its potential limitations. Thus, the basic design decision has been to reverse the typical functional layout of a detached house: in this case, the living area has been located on the first floor, and the sleeping area – on the ground floor. This decisive move has solved some significant problems. First of all, it has eliminated a potential clash between the access zone and the daily activity zone, which allows for recovering the values of southern exposure and opening the view onto the gardens of neighboring plots, thanks to which optical extension of the plot has been generated. The necessity to align the building with the existing building line situates it in the central part of the plot, which gives the possibility of dividing the garden into two different zones: the bright southern one with a vast view, and the northern, slightly shaded one of forest character.

The building is based on a square plan (16 × 16 m), which is functionally divided into two halves: northern and southern. The first (internal) one is a two-story residential part, and the second (external) is a driveway for four cars under a terrace along with the house entrance area. Through the door on the ground floor one enters a wide hall leading to various parts of the building: the left wing (intended for the parents), the right wing (intended for the children), and up the stairs to the upper floor. Directly from the hall, one can also access auxiliary rooms, i.e. a laundry room, utility room, cloakroom and shower room with toilet. Axially, an elegant staircase divides the space of the ground floor symmetrically, and at the same time constitutes a buffer between the functional zones, providing independence and intimacy to the residents of the ground floor. On the first floor, there is an undivided living area, whose space can be arranged at will. What complements the recreational area of the house significantly is an outdoor terrace that provides a panoramic view as far as the ‘green horizon’.

The structure and the formal language of the building constitute the result of a clear functional disposition. Its order is reflected in the structure of the façade, in the systematically repeated module, in the symmetry as well as in the scale and proportion of window openings. The main building material of the house is the natural color concrete. The decision to use it results from the local tradition of industrial production of cement. The crudity of concrete contrasts with the delicate golden shade of brass which is used to produce some elements, such as: the entrance door, window metalwork, banister, and roof work. On the ground floor, between the massive pillars, there are sliding curtains of the same shade, which – in addition to their protective function against weather conditions – lend the whole building a sense of lightness.

The axial arrangement of both the plot and the functions of the house refers to neoclassical villas, distinguished by their timeless elegance and grandeur of the materials used in their construction. In its character, the building under design constitutes an elegant suburban residence, remaining in opposition to the rapidly changing and even faster aging trends.